Robin has already outlived John Keats and hopes to do the same with that other great Romantic poet, Amy Winehouse.  He studied literature in London and York and is currently working on a collection of short stories about music, Suicide Notes.  You can follow him on Twitter @impropaganda.His winning entry is a story entitled “And So We Beat On”.

Georgia was born in Swansea. She won third prize at the Terry Hetherington Award 2012, highly commended for The South Wales Short Story Competition 2012 and was short-listed for the Swansea Life Young Writing Category of the Dylan Thomas Prize, 2008. Whilst working on a PhD in Creative Writing at Swansea University, she writes for Wales Arts Review. Most recently, she was short-listed for NWR's Flash in the Pen competition and featured in Parthian's Rarebit Anthology and her debut short story collection will be published by Parthian in Autumn 2014.

Her winning entry is a story entitled “Turnstones”

Siôn is a Welsh speaking Welshman. He lives in Gelli, Rhondda Fawr, and currently works at Ysgol Gyfun Cymer Rhondda, as a learning coach. He has various pastimes which include rugby, painting, writing and performing music and DIY projects. He went to a welsh primary and secondary school in the Rhondda.  He then went to art collage where he specialised in illustration before going on to study Media & Creative Writing at Trinity College Carmarthen. He’s written poetry, short stories and essays, and has been published by Parthian, Planet & Red Poets.  He’s performed at a number of events including the Hay literary festival, Hay Fringe Poetry festival & New Theatre Wales' Treorchy Assembly. He is currently working on a novel based on ideas explored in "Every Cloud".

His winning entry is a story entitled “Every Cloud”. 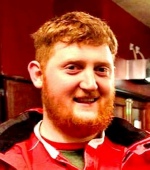